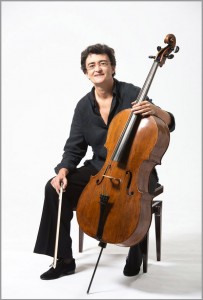 Recognized by the musical review Diapason as « an exceptionally original artist », french cellist Valérie Aimard is popular with musicians and audiences for the great sensitivity of her playing and her musical intelligence. An outstanding chamber musician, V. Aimard has performed concerts in over 30 countries.She has been invited on several occasions at the legendary Marlboro Festival (USA).

She studied with Michel Strauss and Philippe Muller at the Conservatoire National Supérieur de Musique in Paris. Encounters with illustrious musicians as David Geringas, Lluis Claret, Janos Starker, later enriched her musical personality.In 1992 she met the american cellist Bernard Greenhouse, a founding member of the Beaux Arts Trio and disciple of Pablo Casals who became her mentor.

Her broad repertoire include the complete Beethoven sonatas performed with Cédric Tiberghien,  Mendelssohn’s work recorded with her brother Pierre-Laurent Aimard , pieces of György Kurtag, with whom she has worked intensely, the complete Brahms chamber music, among many others.

She has recently created two YouTube channels : ONLY CELLO, an Anthology of solo cello works and Cello Kids, dedicated to teaching repertoire. Both of them having a worldwide success. More than 200 pieces : a cello encyclopedia !

She plays a 1694 Italian cello probably by Grancino .

Since 2002, she has been passionate about the art of Mime. For the last several seasons she has been performing her one woman show « Bulles » (« Bubbles ») in various Parisian theaters.
www.valerieaimard.fr